Options Have Meanings, or, How I Made an rsync Seven Times Faster

Warning: Doing this is making a clear tradeoff between security and speed. Do not do this on the public Internet or across a network you do not trust.

rsync is one of those tools that is in every computer user’s toolkit. It’s fantastic for moving large amounts of data around and for migrating data from one system to another.

rsync also has a ton of options and, after awhile, you get to where muscle memory means you just type the same few options over and over again. With me, that was -avz, archive, verbose, compression.

Recently, I was migrating several terabytes of data from a NAS to a computer. As is often the case, I fired up an rsync job and watched it.

It maxed out at about 35 megabit. Across a gigabit switched internal network.

I grumbled about how the NAS is slow and went to do something else, figuring this was going to take a few days to finish. But a couple hours later it occurred to me to circle back and look at this again. It was bugging me.

My first thought was to eliminate compression. This is going across an entirely internal switched network, I really don’t care about reducing bandwidth utilization. So I dropped the -z options.

The result was an instant speed gain of about 5x. I was pushing 200 megabit now and the time to completion had fallen from six days to about 36 hours. Impressed, I decided to tinker a little bit more. My next idea was to eliminate any encryption (again, this is an entirely internal operation, don’t do this across the Internet or on any network you don’t trust). No dice, I couldn’t drop encryption entirely, but I could choose the weakest cypher that both ends would support. In my case, that was aes128-ctr.

With a little bit of trial and error and some Googling, this is what I finally came up with:

No compression, weakest cypher I could find, disabled some stuff on ssh that isn’t needed. With this my transfers are sustaining about 250 megabit and the time to completion has fallen to about 24 hours. 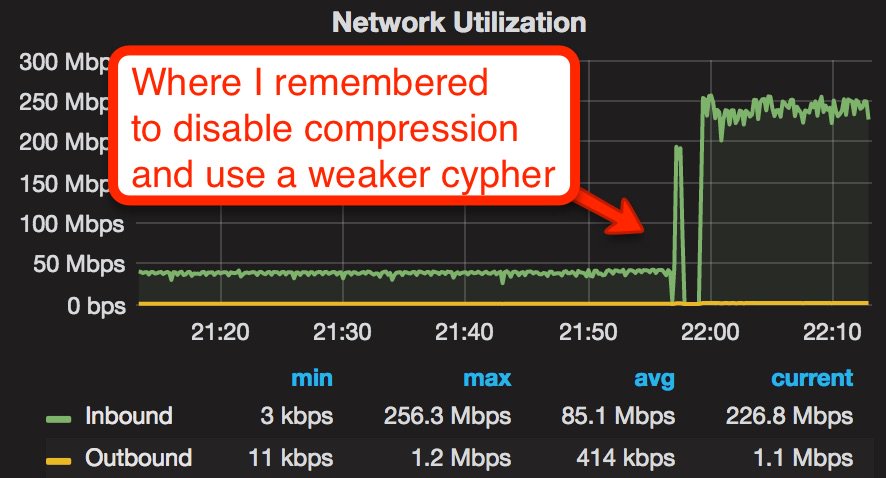 The Stupid Simple Guide to Setting Up Your Own DNS Server

I’m a developer, first and foremost. I like writing code. To me, maintaining servers, configuring things, troubleshooting network issues and the like -  these are things I do to support my primary interest and job as a developer. I’m not ignorant of these things, but all things considered they’re not my favorite things to do. One thing I will admit I’ve been ignorant over the years is DNS. Oh sure, I know at a high level how it works. I even know a bit about the different record types. I knew enough to have my own domain name, configured using Godaddy’s DNS servers to point to my server. But actually running my own name server? Something I’ve never done and, for some reason, had this unnatural fear of. Well, no more. I’m now running my very own shiny new name server and, actually, it wasn’t really as difficult as I thought. And because this was a learning experience for me, I figured I’d walk you through what I did as well. Picking  a Server There are two big players in the “DNS Server software” space: BIND and djbdns. BIND is the 900 pound gorilla that has been around forever and ever, and is insanely difficult to configure. djbdns is from the same guy who wrote qmail - I’ll let you be the judge of that. But after researching and actually attempting to install both of these, I eventually gave up. Both just came across as being too complex for a simple name server handling a couple of domains, and the documentation for both was equally complex. That’s when someone on Twitter pointed me to MaraDNS. I looked it over and was surprised to find good, readable and simple documentation that made it look easy to install. So I decided to give it a whirl. Here’s what I did. Note that this install is for a Gentoo system. Yours will be different if you’re using something else. Installing and Configuring MaraDNS First step is to install it. emerge maradns And let Portage do its thing. Once it’s installed, you really only have to worry about a few files. In /etc/mararc, you need to check to be sure you’re binding to the right interfaces. In my config, I bound it to the loopback and to the main interface: ipv4_bind_addresses = "x.x.x.x, 127.0.0." After that, you tell it to be authoritative, and what domains you are wanting to serve records for. csv2 = {} csv2["robpeck.com."] = "zones/robpeck.com" Note the period at the end of the domain name - it’s important. Each entry in the csv2 array should map to a zone file. I put mine in the “zones” subdirectory (which, in Gentoo, lives under /etc/maradns). mkdir -p /etc/maradns/zones Then, with your favorite editor (which should be vi :P), you create your zone file. The one for robpeck.com (partially) looks like this: robpeck.com. NS ns1.epsilonthree.com. robpeck.com. NS ns2.epsilonthree.com. robpeck.com. +3600 A x.x.x.x robpeck.com. +3600 MX 0 robpeck.com. www.robpeck.com. +3600 CNAME robpeck.com. So what are we doing here? Well, here it helps to know something about the different types of DNS records. I’m not going to cover all the different types of records - this is a good list of common ones and Wikipedia has a full list. The important ones you need to know are NS (Name Server), A (the main record), MX (mail server records), and CNAME (alias). The “+3600” is setting a timeout on the records to one hour (3,600 seconds). By default, the server will send one day (86,400 seconds). Here, I’m telling the server what the name servers are (strictly speaking, this isn’t required, but I added it all the same) and that the main address for people requesting “robpeck.com” is this IP address. I’m also saying that people who request “www.robpeck.com” should get the IP address for “robpeck.com.” I also add an MX record that points to robpeck.com with 0 as the priority (the first (and only) server). That’s it! Restart MaraDNS: /etc/init.d/maradns restart And you can test it out. dig @localhost robpeck.com A You should get a big long printout, but what you want to see is these two lines: QUERY: 1, ANSWER: 1, AUTHORITY: 2, ADDITIONAL: 0 robpeck.com. 3600 IN A x.x.x.x Assuming the above is the correct address, congratulations, your DNS server is now resolving properly locally. Delegating your Domain The next step is delegating your domain to your own server. I’m not going to cover this in too much detail because how it happens depends on the registrar. In general, this is a two step process: Register your name server’s IP address to a name. At NameCheap, when you’re in the domain screen this is done under Advanced Options > Nameserver Registration. Under GoDaddy, this is under the “Hosts” section of the domain information screen. You need to add at least two “nsX.domain.com” entries, but they can both point to the same IP. Delegate your domain to the names you just created. At NameCheap, you would go General > Domain Name Server setup, and Specify Custom DNS Servers. Then, enter the two (or more) names you just created “nsX.domain.com”. I can’t remember how I did this in GoDaddy, but I remember it was pretty apparent. That’s it! They say it takes 24-48 hours, but I started seeing requests hit the new name server within about an hour. Of course, since I wasn’t actually changing IP addresses, there was no real downtime. As of now, all my domains are being served off my own nameserver. It’s kind of a neat feeling of accomplishment, knowing you’re not relying on someone else’s DNS setup - they’re just providing you a name. This makes domain transferring much easier and adding new records much easier. And seeing as how I’m currently in the process of transferring all my domains away from GoDaddy, this will ease the transition.
October 27, 2010