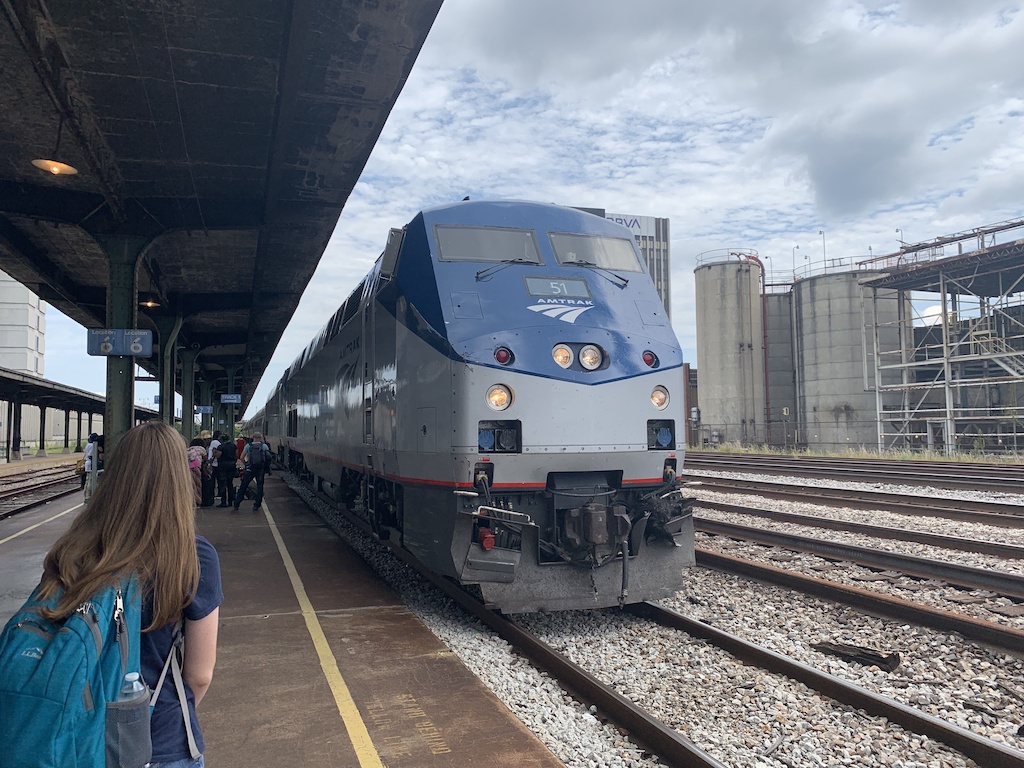 I love flying. Always have. Ever since my first flight as a kid, there was just something magical about getting into a giant metal bird and taking to the sky. I say was because it seems like, especially over the last decade or so, we have gone out of our way to make flying as miserable an experience as possible.

The “golden age” of air travel is long behind us and flying is now just a completely miserable experience. And it pains me to say that because I used to love flying. I loved airports, watching planes, feeling the potential of all the places you could go. But now, it is just an objectively awful experience.

I could keep going, but you get the idea. And yet, we just accept this, because “you have to fly.” Sounds an awful lot like learned helplessness to me:

If this industry was forced to compete on merits alone, it would have gone by the wayside a long time ago. Air travel has become wildly unpleasant because we tolerate it and accept it, and because we view the journey as being separate from the destination, rather than being an integral part of the whole experience. We want to get where we need to go, and if that means being stupidly miserable for a few hours, well, that’s just the price.

But what if it wasn’t?

This last week my wife and I decided to go to New Orleans. But rather than make our usual flight reservations (which would have been about $600 for the pair of us) or plan a drive of about 8 hours (along with costs associated with fuel, parking, etc) we decided to do something entirely different: we took the train.

Yes, the train. They still exist! We hopped on the Amtrak Crescent from Birmingham to New Orleans. And I just cannot say enough positive things about what a great experience this was.

First of all, start with the obvious: the cost. It was $150 roundtrip for my wife and I to go from Birmingham to New Orleans. Airfare was around $600, and I would have paid $150 in parking alone if we had driven.

Moreover, the time difference between any of these options was not all that different. The train was scheduled at seven hours, about the same as driving time without stops. And air travel would have been about the same once you factor in getting to the airport early, two flights with a layover in Atlanta, and getting from the airport to downtown.

There’s also no need to show up super early with the train. As long as you’re there 5 minutes before departure, you’re getting on the train. There’s no security theater, no 3oz liquids in bags, no porno-scanners or surly poorly trained “security” “agents.” No showing IDs or worrying if they IDs you have are acceptable. Just walk up, get on the train and have a seat. 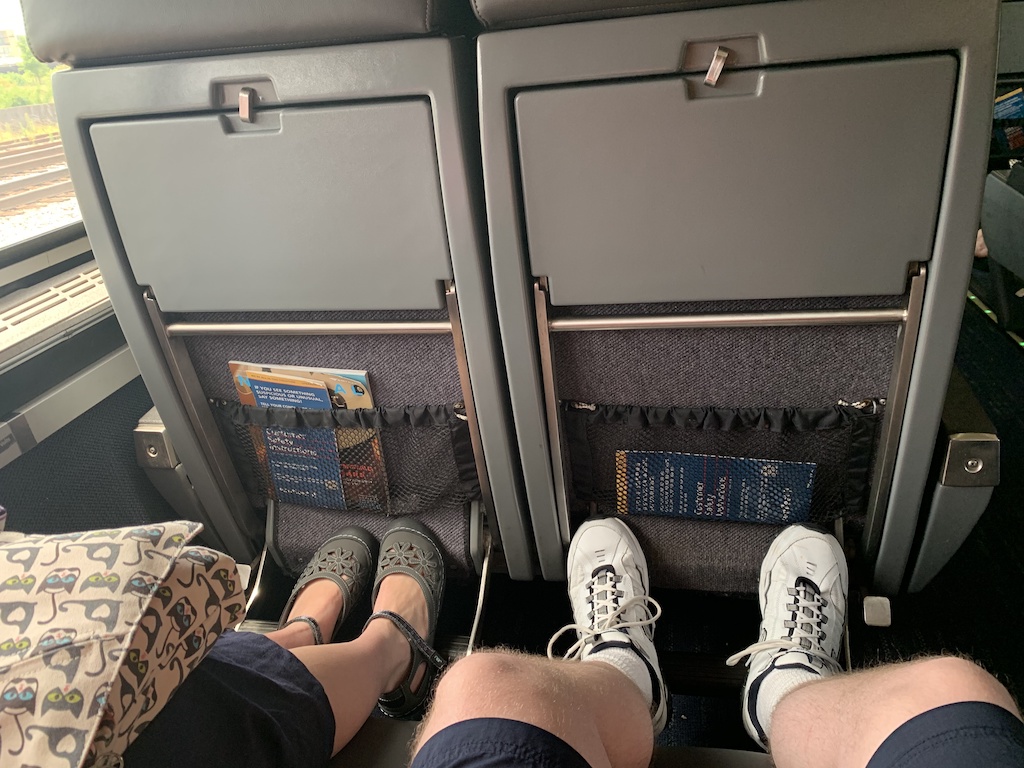 And once you get on, there is so much space it blew my mind. There must have been 50 inches of seat pitch between the seats in the car. I am 5’ 9”, and it was enough space to fully stretch my legs out without them even going under the seat in front of me. There’s so much space that the seats are basically mini- recliners and have a small ottoman to support your legs. Width wise, they were about the same as a first-class airline seat.

There was also two 120V AC plugs at each seat and free wifi that mostly worked as well. It was intermittent at times, but far better than most inflight wifi. 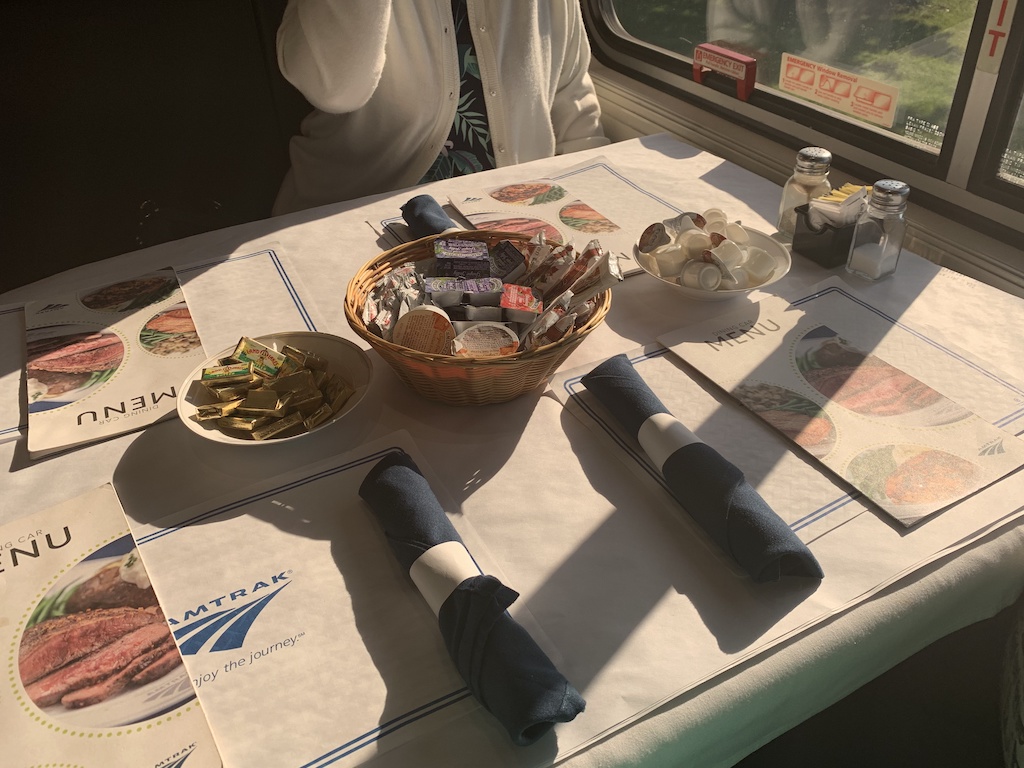 Want to go for a walk? You can walk the length of the train. Or maybe if you’re hungry? You can choose either the lounge car which has a small convenience-store like shop with fast eats and some booths to chill out in. Or one car back, you can have a full, hot, sit-down meal with table service! And you can always pack a cooler and bring your own food and drinks as well. We did this and saw many others doing it as well.

With the train, you arrive in the middle of downtown. In the case of New Orleans, the train station is right next to the Superdome and right on the streetcar line, so no need to rent a car or take a cab/Uber/Lyft from the airport. Hop off the train, hop on the streetcar or just walk like we did.

So What’s The Catch?

As you might have guessed, it’s not perfect. There are some things to be aware of before you run to Amtrak.com and book a ticket.

First, your train is almost certainly going to be late. Amtrak doesn’t own the tracks they run on outside the Northeast, so they are at the mercy of the freight companies. We were about an hour late getting into New Orleans. But, weirdly, I found that this didn’t bother me that much? I’m guessing because I factored that in. But if you need to be somewhere on time, be sure to give yourself extra time.

Second, if you are shy or socially awkward, avoid the dining car. They’re going to fill every seat, so you may be sitting at a table with a stranger. Some people like this (indeed we had a great breakfast with two older ladies on the way back.) But others don’t, and if you don’t, you can get your order to go.

Third, and probably most disappointingly, there just aren’t that many trains to choose from. From Birmingham, you can either go south towards New Orleans, or north towards New York and various points in between. And there is only one train a day in either direction, so be sure you don’t miss it.

Fourth, the parking situation at many train stations is questionable. We ended up parking at the Birmingham airport and taking a Lyft to the train station. That was the best way to ensure our car was safe.

Finally, depending on where you live, the train may arrive at odd hours. The total duration of the Crescent from New York to New Orleans is about 30 hours, but the train doesn’t stop at night so some of those stops in the Carolinas are occuring at like 3am.

Our New Orleans vacation lasted only about a day before flooding and Hurricane Barry shortened it. We woke up on Wednesday to find the streets out front of our hotel under about 3 feet of water. And when the water receded, we were evacuated from the hotel because the hot water and fire systems were broken. Within a half-hour of arriving at the new hotel, we were called by Amtrak to tell us that Friday’s train was cancelled. We were rebooked on Thursday’s. We essentially had one day in New Orleans.

So is a long-distance train a viable replacement for air travel? I guess the answer is, “it depends.” If you are going where the train goes, and if you can afford the time, and if you can make the time the train departs? Then yes, the train is a far superior experience to flying or driving.

But there is a sweet spot between time and distance. Beyond about 10 hours, you’re really looking carefully at flying even if it is a miserable experience. While you can sleep on the train (there are even bedrooms!), you’re still looking at taking about 2 whole days to go from New Orleans to Los Angeles, plus a day from Birmimgham to New Orleans. However, if you don’t look at the travel part as separate from the destination part and just sit back and enjoy the scenery, it truly is a wonderful experience.

For my part, I’m going to start just taking the train whenever I can.

Welcome to the new, freshly redesigned robpeck.com! It’s amazing how you can become used to a design. It becomes like a warm coat. You love the predictability, you spent a lot of time getting the fonts right, getting the layour right, and everything is just perfect. That was the case with this site, that was pretty much exactly how it was way back when I migrated the site from Wordpress to Jekyll in 2013. To put that into perspective, my daughter was not even a year old yet. Barack Obama was just one year into his second term, the iPhone 5S had just dropped a month earlier, the first 4K TVs were shown off at CES. A long time has passed. And then the years pass. New devices and browsers appear. New technologies become available, and cruft builds up. In this case, a simple task of “I need to add a box to the site so that people will quit trying to use the comments for tech support and go to Github instead” became a full scale burn it down and start again redesign. So, aside from the new design, what else has changed?
January 19, 2019

I’ve been an Apple fan for a long time. My first laptop was a Powerbook 5300cs, purchased secondhand at the Auburn University Surplus Auction. I’ve been using Apple equipment exclusively since 2007. My desktops and laptops are all Apple, I use AppleTVs exclusively for streaming, I carry iPhones and iPads. If it has a shiny Apple logo on it, I’ve probably bought one. So it pains me to write this post, but… The 2018 MacBook Pro sucks. There. I said it.