Siesta is a framework for Swift that dramatically simplifies working with RESTful APIs. And like many things in Swift, it is natively built around asynchronous execution. It may fire any number of requests back, and they may complete in any order that is undefined.

But sometimes, you need to execute things in a specific order. Like when the result of one call will change subsequent calls. A classic example of this is an API where you might need to create a folder first, then upload files into the folder you created. So the folder creation needs to happen first, then the file uploads can happen after.

Discovered something neat with the new version of MySQL and thought it warranted a mention. Storing tree structures in a relational database is a common use case across many different areas of tech. The problem comes when you need to construct a query based on a subset of that tree.

But MySQL 8 has some nice new features that makes doing this a breeze.

For the last few years, Gulp has been my go-to task runner for Node projects and, generally, anywhere where I need to build things or run tasks. But the recent release of Gulp 4 broke all of my config files and left me with hours of frustrating rewrites, I decided to see what else might be out there. And, naturally, I landed on Grunt.

One thing I liked about Gulp (prior to 4.0) was it’s much looser structure that allowed a lot of freedom in how you structured your file. Grunt seems to be much more structured and opinionated. And sometimes, I don’t like those opinions.

But I wanted to use that command. And there doesn’t seem to be any way to just say “run these arbitrary tasks before starting the watcher.” At least not one that I could find clearly documented. Sure, I could just make my own mywatch or similar command, but I’m picky. I want my command, so we need a way to rename it.

Let’s say you have a Laravel application that does some data processing, and you want to monitor a directory for incoming changes, that you can then process using queued jobs. There are a couple of ways you could do something like this.

You could scan those directories on a schedule using a cronjob. It’s doable. But what happens if you want to monitor a few thousand directories for changes? You can use tools like incron. Also doable, but another dependency.

But what if I told you you could do it all with PHP. And within Laravel, no less?

I’ve been an Apple fan for a long time. My first laptop was a Powerbook 5300cs, purchased secondhand at the Auburn University Surplus Auction. I’ve been using Apple equipment exclusively since 2007. My desktops and laptops are all Apple, I use AppleTVs exclusively for streaming, I carry iPhones and iPads. If it has a shiny Apple logo on it, I’ve probably bought one. So it pains me to write this post, but…

petfeedd, the daemon I wrote for my Raspberry Pi-powered cat feeders has been updated to fix a number of bugs people were seeing attempting to install it since I originally wrote it in 2017.

Perhaps the biggest change is Docker support! That’s right, if you just want to run petfeedd, now you can do it in just three commands! No more installing various libraries and things (but that approach still works as well.)

PlayerControls is a macOS Cocoa framework that creates a View containing playback controls for media like videos or sounds. It is written in pure Swift 4 and has no dependencies.

SearchParser is a parser that converts a freeform query into an intermediate object, that can then be converted to query many backends (SQL, ElasticSearch, etc). It includes translators for SQL (using PDO) and Laravel Eloquent ORM. It supports a faceted language search as commonly found on many sites across the web. It is written in modern PHP.

Both are licensed under the MIT license. Go check them out on Github.

Working on doing some upgrades for one of my clients and I hit on an idea. He has a lot of videos available, but each one only has a static image as a thumbnail, taken at a set point in the video (by default; the owner or and admin can go in and recreate the thumbnail at a different time point if they want.) But what if, instead, we could create an animated GIF composed of several frames from the video?

From a user’s perspective, a single frame might not tell you a lot about a video. But ten frames taken over the course of the whole video can tell you a lot more about the video than the single frame would. How would we implement something like that? 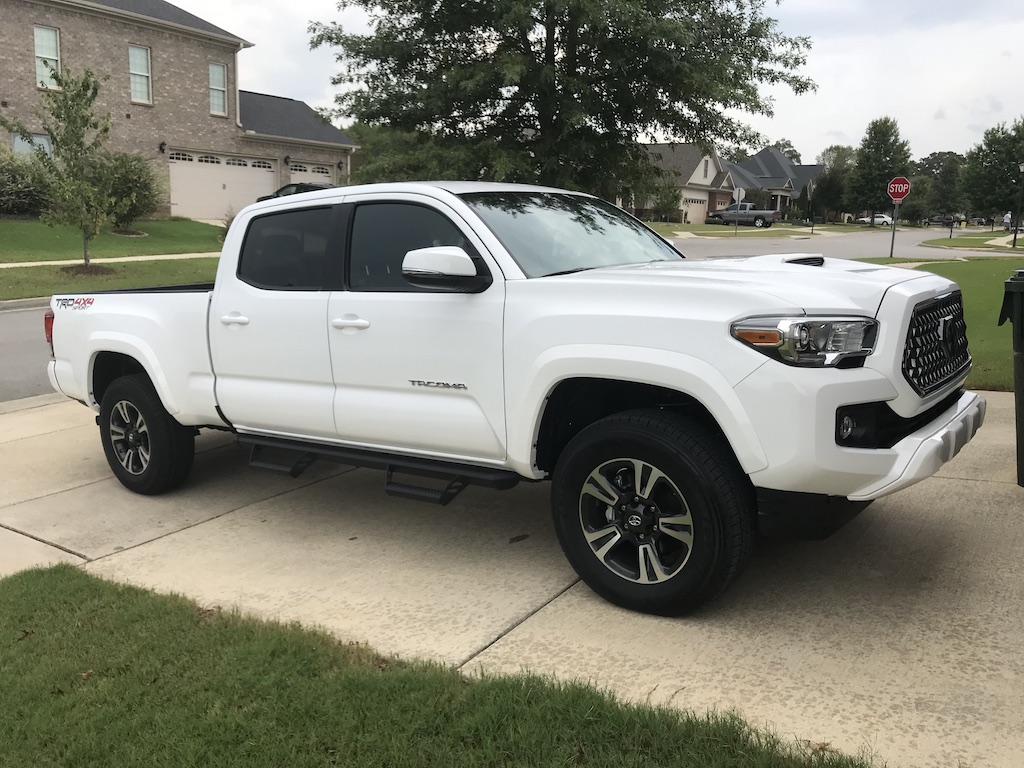 So after twelve years driving an ultra-reliable 2006 Toyota Tacoma, I decided it was finally time to upgrade. So, of course, what else to buy … but a 2018 Toyota Tacoma. :)

Things have really changed in twelve years, and where my old truck originally came with a simple CD player head unit (that I later upgraded to a Clarion CX-501, primarily because I wanted Bluetooth), my new truck has this fancy touchscreen entertainment system that has mountains of options and can even show me weather radar while driving!

So I was exploring around inside the menus last night and I discovered that you can, theoretically, set custom images as your startup and “screen off” images. But, unfortunately, the details of how to do this are buried somewhere in a SEVEN HUNDRED PAGE owners manual with a very thin index. Ain’t nobody got time for that. So I googled around and found some answers on forum threads, and decided to write a post on how to do this to raise the visibility of it some.