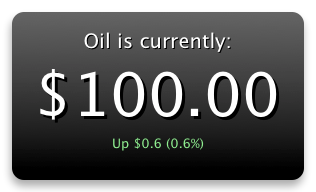 Because there doesn’t seem to be a good, simple way to track oil prices on the Mac dashboard anymore since the previous widget I used quit working, I whipped up a quick little widget that allows me to monitor the price of Crude Oil on the New York Mercantile Exchange. It uses Bloomberg Energy as it’s information source and updates each time you show the dashboard.

The Mac Oil Price widget is deprecated and no longer available. macOS no longer supports the Dashboard and Dashcode hasn’t worked many years. If you want to track oil prices using the new Notification Center, you can use the built-in stocks app with the code F*CL.NYM.